As a closing post on this effort I present you the following contributions:

Poxy: A proxy for the OpenFlow controller – OpenFlow switch connection
Pongo: An POX application, integrated with Django, which allows handling of the topology of a mesh of nodes (currently customized for the Community-Lab testbed).

Here you can find the presentation slides.

Thanks for following. Comming up more work about Community Networks.

And we are ready to go!

Now everything is set up. Have fun 😛

Batman-adv is a distance-vector mesh routing protocol which acts completely on L2 (or 2.5 as it is said often).

Technical Facts (that were usefull to me)

“BATMAN was proven to work as well in an environment with signiﬁcant interference and longer distances between nodes as in a friendlier setting. In contrast, AODV often failed to provide stable routes in cases where multi-hop communication was necessary”[3]

Since it’s third version (v.2011.3.0) batman-adv has much improved performance.[4] (after the evaluation papers were written )

Batman can be used for any kind of interface.

Finally, I want to share with you a interesting article, presenting a different motivation beside mesh-netorking: Mesh networking with batman-adv

Not mounting the directories

The sys_admin capability should be enabled in order for the filesystem to be mounted correctly when the container boots.

Not connecting to the console and respawing

The ttys should be allowed in the config file.
An example working config file can be found here
Looking at the file rootfs/etc/inittab the tty device that is spawned after the initialization can be found. In order to start tty1 and tty2 something like this should exist:

These ttys should also exist in the roots/dev folder or should be created:

Then a connection to the console should be started:

Mininet before version 2.0 did not come with an easy way to reach the Internet through the mininet VM. Mininet 2.0 VM comes by default with connection to the network of the host, overriding this problem.

I am now going to describe how to invoke mininet to a remote Debian host through ssh and rdesktop using VirtualBox in a headless mode. Virtualbox is assumed to be installed.

-Connect through with rdesktop through Linux client

To connect with the windows client mstsc.exe a .rdp should be created which should contain the username and password (help).

Now mininet is ready for remote use through remote desktop or ssh ;-).

In this post I will provide some notes on the OpenFlow tutorial using Mininet.

The topology used in the tutorial is the following (the controller is external to mininet): 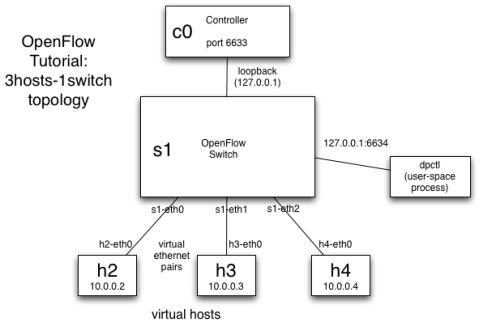 We start the Openflow reference controller with the command:

This will create the following series of messages to be exchanged.

You can get a copy of a similar capture from here. The capture can be viewed in wireshark using the Openflow Wireshark dissector (Helpful guide).

Then, the controller and the switch continue exchanging frequently Echo Request and Echo Reply messages.
According the Openflow specification[1] :

This can prove to be a problem for our case. How this is implemented by the different controllers, as well as the frequence and its possible modification in a proactive environent should be explored. The tutorial mentions about
POX that:

Since the switch flow tables are initially empty a ping command will cause the following message exchange.

You can get a copy of a similar capture from here.

We can see the Packet In,Packet Out and Flow Mod messages.
Flow removal messages do not appear as mentioned in the tutorial. This may be a problem with the OVS version (1.2.2). Additionally, this version does not support the send_flow_rem flow option in through the ovs-ofctl tool and neither is this option supported by the dpctl provided by the OF implementation. Thus, there is no way to check which is the actual problem.

Following the tutorial we can see that using kernel-space OVS bandwith (measured with iperf) is arround 190 Mbps while with user-space OVS is arround 23Mbps.

By default, the mininet vm comes without connection to the host network. This happens because the guest network is implemented with the virtio paravirtualization driver.

There is going to be a post following, which will contain notes from the rest of the tutorial using POX controller in order to implement L2 and L3 learning.

The following information are notes adapted from the deliverable Initial system software and services of the testbed of the CONFINE project.

Reuses the outcome of the first development cycle as backend functions. Once completed, it will contain the full node design and management API.

The virtual RDs are linked with their local interface to a local bridge (vct-local) on the system hosting the VCT environment. Further bridges are instantiated to emulate direct links between nodes (vct-direct-01, vct-direct-02, …).

By connecting the vct-local bridge to a real interface it is possible to test interaction between virtual and real CONFINE nodes (RDs). This way VCT can also assist in managing real and physically deployed nodes and experiments.

Some possible applications that nodeDB will enable are: IP address registry and allocation, Map, Link planning, Auto configuration of devices. Also an common DB approach will ebable the investigation of experimental features like: Social networking functions, Federation, Services offered by the network or by users.

The management software is implemented based on Django.

Virtual Confine Testbed (VCT) is an emulator of an actual CONFINE testbed environment. VCT is an easily deployable resource satisfying many goals simultaneously. For the end-user researcher, VCT is a platform through which he can get a quick overview of the function of a CONFINE testbed, familiarize with the environment as well as proof-test experiments destined for the CONFINE testbed. For the future CONFINE developer, VCT facilitates familiarization with CONFINE research devices (RD) and their behaviour, as an actual CONFINE OpenWrt image is used for the virtual nodes. 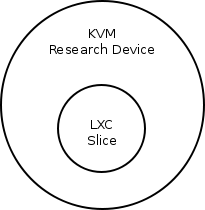 All the scripts are softlinks to the main script vct.sh. The scripts are actually implemented as functions in vct.sh where the main function redirects to the corresponding function after checking the name of the executable.